The truck driving industry is a constantly changing environment.  The Federal Motor Carrier Safety Administration is updating rules on a regular basis.  The shipping trends in the industry also change regularly. This news blogs is designed to keep students up to date and informed about changes in the industry and current events with Interstate Truck Driving School.

check out this article from Bloomberg

To the human driver, it would have been an obvious obstacle: a police car and fire truck, emergency lights blazing, blocking the lane ahead.

But to the Tesla Inc. Model S traveling down a Southern California freeway last year on Autopilot, it was a far more vexing technical challenge that’s inherently difficult for the growing number of vehicles that automakers are equipping with driver-assist systems.

The car slammed into the rear of the fire truck, resulting in no injuries but drawing the attention of federal investigators concerned about the emerging technology.

“It’s not unique to Tesla,” said David Zuby, chief research officer at the Insurance Institute for Highway Safety, which has studied how automated driver-assist systems perform. “We’ve seen evidence in our test driving of other systems with this kind of problem.”

The radars and cameras used to sense obstructions ahead each have their limitations and computer software that evaluates the data is still a work in progress, according to the experts and advocates. In many cases, they are better at tracking moving vehicles ahead than recognizing parked ones.

To be sure, automated driving systems have clear potential to improve traffic safety by supplementing the driver. Automatic emergency braking alone has been found by IIHS to reduce rates of rear-end crashes by half, and the insurer-funded group estimates that the system could reduce police-reported crashes of all types by 20%.

So far, Tesla is the only carmaker cited by the U.S. National Transportation Safety Board in an accident investigation for how it designed its partially autonomous system, but the case highlights the broader limitations of similar technology. It also puts a spotlight on a related concern: how to keep the imperfect humans behind the wheel engaged.

The sensors on a Tesla and other cars are relatively good at following a vehicle in the same lane and adjusting speed to maintain a safe distance. But when a vehicle changes lanes — known as the “cut-out scenario” — it can leave the trailing vehicle’s sensors struggling to assess what’s ahead.

“The cut-out is one of the hardest scenarios,” said Phil Koopman, an engineering professor at Carnegie Mellon University and co-founder of Edge Case Research, a Pittsburgh-based autonomous vehicle technology company. “There’s no question about that.”

The radar and camera system on the Tesla involved in the Jan. 22, 2018, crash in Culver City, California, didn’t “see” the fire truck in time to brake, according to the NTSB. The car’s automatic braking system didn’t activate, though it gave the driver a collision warning 0.49 seconds before impact, the investigation found.

The Tesla sped up after the vehicle it had been following changed lanes several seconds before the impact, hitting the fire truck at 31 miles (50 kilometers) per hour.

The Model S involved in the crash was a 2014 model. Since 2016, Tesla’s vehicles have received additional cameras, improved automatic braking and, according to the company, they can better handle the cut-out hazard.

Tests to replicate cut-outs were found to be one of the most challenging to automated driving systems examined in 2018 by Euro NCAP, which tests and assigns safety ratings for vehicles in Europe.

Automated driver-assist systems on some models tested last year by Euro NCAP found several vehicles struggled to automatically handle stationary objects and in the cut-out scenario. The Mercedes-Benz C-Class, BMW 5 Series and Nissan Leaf, for example, offered “limited” or “very limited” automated support and primarily relied upon the driver to handle the situation.

But it’s not just a sudden lane change that can flummox such systems, Koopman said.

The radars typically used on vehicles that have automated braking can’t distinguish very well between a road sign and a stopped vehicle, he said. If a car slammed on the brakes for every object it sensed ahead, it would cause endless false alarms.

That can pose risks, too. More than 80 late-model Nissan Rogue drivers have complained to auto regulators that the SUV’s automatic emergency braking system activated unintentionally, 10 of whom claimed the misfire occurred when the road ahead was clear. The National Highway Traffic Safety Administration may open a defect inquiry into the issue after the Center for Auto Safety, a consumer advocacy group, reported the complaints to the agency.

A Tesla that struck the side of a semi-truck in Florida in 2016, killing the car’s driver, didn’t activate its automatic brakes and wasn’t designed to stop for such stationary objects, according to an NTSB report.

Many driver-assist programs, including Tesla’s, combine data from cameras with radar. That’s not fail safe, though, Koopman and Zuby said.

Zuby said he has observed other scenarios in which the sensors didn’t perform well, such as sensing vehicles that have stopped ahead on some highways, Zuby said.

“A lot of times these systems will not see or respond to the queuing traffic to bring the vehicle to a safe stop,” he said.

Until fully autonomous systems — which will rely on more robust and reliable sensors — become mature, drivers will have to adapt to the partial systems like those on the Tesla.

And keep their eyes on the road.

Some companies, such as General Motors Co., have installed cameras in vehicles that monitor eye movements to ensure drivers are watching the road. Tesla monitors driver engagement by detecting steering wheel feedback caused by a driver’s hands resting on the wheel. The company also instructs drivers using Autopilot to remain attentive at all times, and dashboard prompts require them to acknowledge that responsibility.

Jason Levine, executive director of the Center for Auto Safety, said manufacturers should make sure drivers are ready to take over in an emergency.

“Because the technology isn’t great at everything, it’s important that the driver stay engaged at all times,” he said.

The driver of the Tesla involved in the California crash told NTSB investigators he was looking ahead, but was unable to see the fire truck in time. A witness in another car told the NTSB and police that the driver was looking down at what appeared to be an electronic device.

The NTSB concluded on Wednesday that the design of the Tesla automation, which it had previously cited in the 2016 Florida crash, partly caused the accident. It also said the driver’s inattention played a role.

Tesla defended its Autopilot suite of automation systems and said it has adjusted the time intervals between warnings the car gives drivers whose hands aren’t detected on the steering wheel.

“Tesla owners have driven billions of miles with Autopilot engaged, and data from our quarterly Vehicle Safety Report indicates that drivers using Autopilot remain safer than those operating without assistance,” the company said in an emailed statement. “While our driver-monitoring system for Autopilot repeatedly reminds drivers of their responsibility to remain attentive and prohibits the use of Autopilot when warnings are ignored.”

Advocates for cutting the death toll on U.S. roadways are eagerly awaiting the maturity of the technology because of its promise to reduce accidents, particularly rear-end collisions, Levine said.

“It is a potential giant leap forward in terms of protecting drivers, passengers and pedestrians,” he added. “It just has to be done right.” 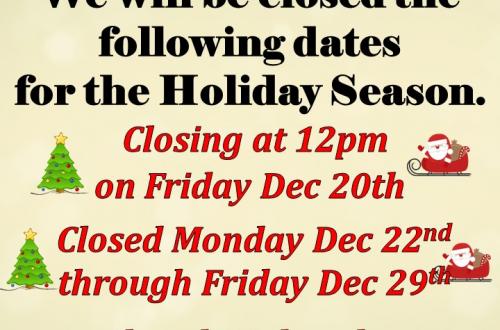 We'd like to thank everyone for a fantastic 2019. We are very much looking forward to 2020.

We will be closed the following dates for the Holiday Season. 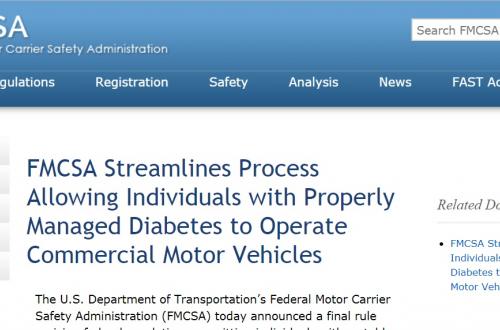 This a huge news! 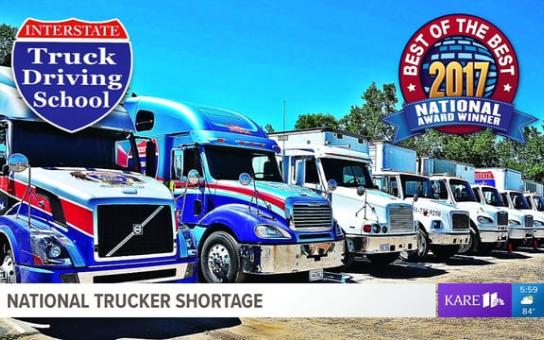 If you see prices creeping higher for everything from cereal to socks in the next few months, you can probably blame this stark reality: There aren’t enough truck drivers delivering the goods to stores.

Kare 11 News out of Minnesota featured a story which covers the recent driver... Read More 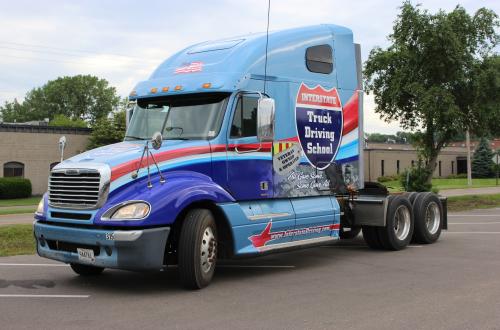 The Trucking industry is changing....it always has been, and it always will change to reflect how the market changes.

The driver shortage and the implementing of Electronic Logging Devices has had some very beneficial effects on our industry.  Here is an article from BLOOMBERG published o... Read More 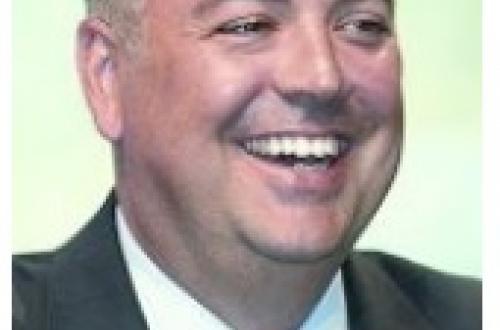 Bob Costello from the American Trucking Association projects out the driver shortage and it is a big number.

Calling it his "warning shot to the industry," the chief economist of the American Trucking Associatio... Read More 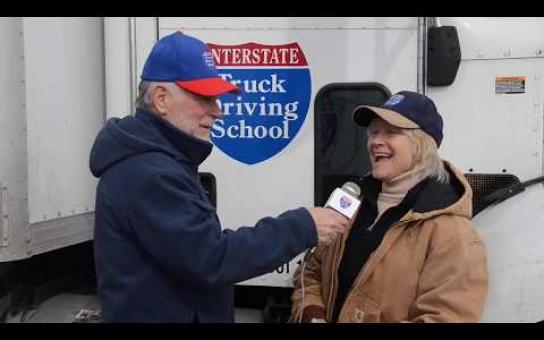 Karen P from Bloomington MN stopped by to let us know about her new job.  Karen was a dedicated student and we are certain she is going to do very well in the trucking industry. 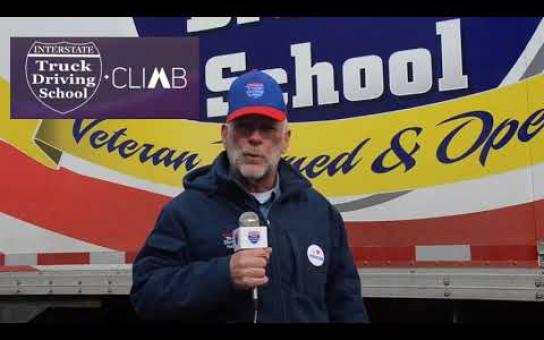 Great news out of Washington D. C. this week.

Great news out of Washington D. C. this week.